The Promised Neverland Caught Me Off Guard

In this sweet and innocent looking anime lies very deep and dark secrets that will keep you on the edge of your seat, episode after episode. I could not help but feel like I was getting Isekai vibes from this series, but this series is not a game. This series follows a home of gifted youngsters who form stronger bonds with one another as the series goes on. I did not really know what to expect getting into this series. It’s currently in season 2 and I recently decided to start here at the beginning and see what it was all about. I was not disappointed. It’s one of the most chilling and compelling stories that I’ve seen in a while. It’s a psychological thriller that kept my eyes glued to the screen.

As of late, I’ve been kind of all over the place with my anime/manga addiction and recently decided to get it a bit more organized, because I was missing out on some seriously good content such as The Promised Neverland, Dr. Stone, and The Quintessential Quintuplets which I’ve yet still to see.  I will be checking out a ton of new series soon just because there is so much fresh content out there. It’s very easy to get overwhelmed without actively organizing my read/watch habits so I’ve been taking the liberty to begin populating my Anilist which you can see here.

Finding great anime and manga like The Promised Neverland and others is my ultimate goal this year. I’m drawn into Neverland’s surreal storytelling, a solid plot that is hard to predict is one of the first things that catches my attention. I believe a solid story has the power to rope the audience in more so than anything else. Without a doubt I want to continue with this series; there are just so many plot twists here and I’ve yet to see the full scope of the world the creators had in mind. I’m still just at the beginning after all, but I want to catch up to season 2 in the near future. There is just so much happening in this series, that it demands the audience’s attention in a way that I haven’t experience in a while.

I have always enjoyed mystery and psychological thrillers, so after the first few episodes of The Promised Neverland I knew from the start that this would surely be a series for my 2021 rotation. I’ll write that up later because no better place to keep track of my anime than here on my own blog. That’s what the blog is for, after all! On a serious note though, I do think I’ve found one of my new favorites with this gem. It is just written so well! It’s funny because this is a series I’ve had on my “plan to watch” list for the longest, and just never got around to it. You know how the plan-to-watch sentiment goes. Those things we plan to watch eventually never get watched. A fresher, newer series comes along, we have more obligations, we get more hours at our work and those backburner series we eventually planned to watch ultimately get sucked into the void of limitless darkness and we forget about them. I need to keep a journal now. I take in so many different series and different genres that I’d go nuts if I didn’t keep track of everything that I was doing.

One of my goals is to explore 120 new series this year. I want to broaden my mind and expand my horizons. Some of those series will be good, some will be bad while others will be amazing, potentially setting up to (potentially) be a masterpiece like The Promised Neverland. I understand that I may be speaking prematurely but so far from what I’ve seen this series is really something special. I can’t wait to get to the end of season 1 and be familiar with all the plot twists and learn the deeper intricacies of the story that I may be missing early on in the series.

2021 so far has been an exciting year in anime and though I am not as up-to-date on my manga as I would like to be I’m sure that there are plethora of great titles out there to delve into as well. I myself have ventured deeper down the rabbit hole so to speak, more than ever before and I do not believe this year will be the last of my anime journey nor will The Promised Neverland be the last great piece of fiction I consume. Though, in the light of consuming great fiction I can’t wait to watch more The Promised Neverland right after I upload this blog entry.

The series has a manga adaptation as well that has received similarly high views  and apparently is one of the best selling manga series in Japan right now. That honestly did not come at a surprise, I just hope to see more people picking this and similar series outside of Japan. There are so many wonderful and amazing series buried under the clamor of more mainstream offerings.  Of course there’s nothing wrong with enjoying a popular, more mainstream anime or manga title but there is a much larger world out there for us to discover. It would be a shame to miss out on some of the new content, a lot of gems are coming out right now. Countless hidden gems spanning over the last 10 years. Just recently, some of the best anime ever made has been given to us. I feel it is my duty as a true fan to seek it out.  Just because something is not popular or highly in demand does not make it bad or worse than the familiar. I used to follow the crowds as well, but I matured and my taste matured and I grew out of enjoying things just because it was what was popular at the time. Personal taste is not a popularity contest at all, and I believe The Promised Neverland will stand the test of time. It is a great series, insightful with a dynamic cast of characters that will connect with our emotions for sure.

In closing if you want a brainless, unprovoking battle-fest of an anime The Promised Neverland may not be for you as the story is deep and it touches on many of our own existing human conditions. However, if you’re looking for something fresh and intellectually provoking, the psychological nature of The Promised Neverland may be right up your alley. I hope you enjoyed this blog entry, It will be the first of many! 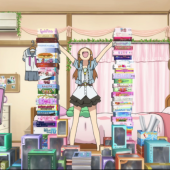